An Extraordinary Life – Interview with Jim Sharman on Blood & Tinsel

Blood & Tinsel, Jim Sharman, August 2008, HB (Australia) Miegunyah Press, 9780522853773 (Aus, US) This interview was first published in the June 2008 issue of BOOKSELLER+PUBLISHER magazine (c) 2008 Thorpe-Bowker (a division of RR Bowker LLC). A doctor said to your parents when you were a child that you have the makings of a philosopher. […]

This interview was first published in the June 2008 issue of BOOKSELLER+PUBLISHER magazine (c) 2008 Thorpe-Bowker (a division of RR Bowker LLC). 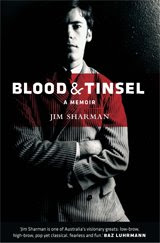 A doctor said to your parents when you were a child that you have the makings of a philosopher. You also mention your love of art that involves personal quests. Has writing your memoir been a kind of philosophical journey?

A walk through anyone’s life will consciously or unconsciously reveal the ideas that have underpinned that life. I’m no philosopher, but I may have a philosophical bent, and while I didn’t actively set out to explore this area, it may be that the book is revealing in this regard.

You mention a certain look in the eyes of Patrick White, shared by other ‘carnivorous’ artistic people you knew, met or collaborated with. Could you tell us a little bit about this personal influence?

If you look at, say, Andy Warhol’s Flower paintings, you are instantly struck by the colour – the intensity of the almost fluorescent flowers. This is because they’re silk-screened both on and over a black background. This is surprising, given the subject matter, but it is this that causes them to sear into your retina and your imagination. It’s like the death rattle in Maria Callas’ voice or the tragic-comic aspect in Patrick White’s writing, or the mysterious twilight on the faces in Bill Henson portraits. The Spanish poet and playwright Garcia Lorca wrote a marvelous essay about ‘duende’ or ‘deep soul’ and it’s this aspect, the recognition of death in life, and vice versa – the indefinable quality that Lorca describes that distinguishes a certain kind of artist and their work. It’s a quality I admire.

Other influences range from your vividly described boxing/carnival childhood, through rock music and opera, films such as 2001: A Space Odyssey, art movements, Japan, and personal relationships. Your writing is rhythmic, visual, kinetic, visceral, and literary. Besides Patrick White, do you have any other influences of a literary nature?

As a director, I’ve worked with some marvelous writers and I am a reader, though a fitful one, so I’m sure all of these things have influenced me – but not consciously. While writing the book I deliberately avoided reading anything substantial, especially memoirs, in order not to be influenced. I did, however, listen to music continually while I was writing – sometimes for pleasure or distraction, but often to evoke particular periods I was writing about. Music triggered certain eras and its influence might also be felt in the overall rhythmic structure of the book.

Your story is contextualised with cultural and world events that transport the reader back to your experience of the era. Did you often notice the effect of them on you or your work at the time, or is it more in retrospect.

Do you have a particular audience in mind for the book? Is it the audience of Rocky Horror, Hair or Voss? Or do you hope someone unlikely will ‘open the book’ and ‘turn the pages’?

The book is dedicated ‘to those who come after.’ That was the readership I had in mind.

With many thanks to the inspirational Jim Sharman.

It really is an incredible book, see my review, and see the book’s website for a sneak peak and information on how you can get it.