At first glance, the Victorian Opposition’s enthusiasm for a new rail link between the existing Huntingdale station and Rowville seems like simple opportunistic politics. And it undoubtedly is. But as we shall see later, a variation on this idea might be worth a second glance. The idea of a Rowville rail line goes back to 1969. […] 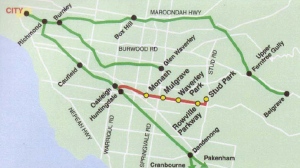 At first glance, the Victorian Opposition’s enthusiasm for a new rail link between the existing Huntingdale station and Rowville seems like simple opportunistic politics. And it undoubtedly is. But as we shall see later, a variation on this idea might be worth a second glance.

The idea of a Rowville rail line goes back to 1969. The most recent substantive development was a pre feasibility study commissioned by Knox City Council in 2004 and undertaken by Professors Bill Russell and Peter Newman.

The study endorses the rail line, arguing that it could reduce the travel time from Rowville to the CBD by 30 minutes, improve the mobility of students using rail to access Monash University, remove cars from freeways and reduce the need for households to own second cars.

The pre feasiblity study is very “preliminary”, but nevertheless there’s enough there to see that there are some formidable obstacles to this proposal.

First, the 12 km alignment would require a grade separated road and rail junction at Huntingdale on the existing Dandenong line. There are also more than 40 road crossings along the proposed North/Wellington Rd alignment. While many of these are minor, the pre feasibility study says grade-separated crossings would be required over seven main roads and two freeways, requiring 75% of the track to be elevated above the median strip in North/Wellington roads.

Second, a third rail track would need to be added to at least that section of the Dandenong line between Caulfield and Oakleigh in order to provide adequate capacity for the additional trains from Rowville to travel to and from the city centre.

Third, according to the pre feasibility study the new rail line would only capture 7% of all journey’s to work from the area. That’s still enough to fill four trains per hour in the peak, according to the study.

Fourth, costs are estimated at $413 million in 2004. The study assumes the five stations can be constructed for $5 million each, however with the latest State Government estimates of $50 million per station, that’s around half the budget gone already (and these would need to be elevated stations).

Apart from the elevated line, five stations and triplication of part of the Dandenong line, the project would also require six new trainsets and associated stabling facilities. It would need park and ride facilities and bus interchanges at some or all of the stations and consequential works would be needed on the roads e.g. revised turning lanes. The study proposes 15 minute frequencies from 4.30am to 12.30am.

Bearing in mind that the 3.5 km South Morang extension of the Epping line will cost $560 million, I suspect the starting point for likely capital costs would be well over $1 billion. The study doesn’t calculate off-peak patronage so operating costs and per passenger carbon emissions are anyone’s guess.

A shorter 2.5 km connection between Huntingdale and Monash University would be a lower cost option. There are getting on for 20 buses per hour carrying 60-70 passengers in the peak from Huntingdale station to the university at the moment. By itself this would probably cost too much to justify rail (and anyway there’s scope to increase bus capacity), but there’s another dimension that might make it all add up.

The Clayton/Monash precinct is the largest suburban employment concentration in Melbourne by far. It has more than double the number of jobs as Box Hill, which is the largest of the Government’s six designated suburban Central Activities Districts (CAD). And it has fifteen times as many jobs as the smallest CAD, Broadmeadows.

While there is no evidence that any science was applied to the selection of the CADs, a prerequisite was that they be located on existing rail lines – in fact they were designated Transit Cities under the pre-existing program of that name. Clayton/Monash is self-evidently attractive to business and industry but was overlooked when the CADs were picked – as were the second and third largest employment concentrations in the suburbs (Tullamarine and Kew/Hawthorn, respectively).

A new rail line through the Clayton/Monash precinct could service Monash University, CSIRO and the various business parks in Notting Hill, Clayton, Mulgrave and Glen Waverley. More ambitiously, it might also connect with the Monash Medical Centre and the commercial and industrial areas around South Clayton.

This proposal could take many forms – possibly a spur line or a loop from the Dandenong line; possibly connected to the Glen Waverley or Alamein lines (and possibly connecting all three!); possibly light rail; or even possibly some form of super Smartbus.

Provided it made economic and financial sense, the potential pay-off could be a major suburban employment concentration along the lines of Chatswood and Parramatta.

Fortunately for all of us, the Opposition has only promised to fund a $2 million feasibility study of the proposed Rowville line (in the event that it takes office at the next State election). What we really need is for both the Government and the Opposition to undertake to examine the broad transport options in this region. That process should be public and evaluated in the context of all the other competing transport projects in the State, like signalling improvements, electrification to Melton and Sunbury, and so on.

Editor of The Urbanist @MelbUrbanist

The Urbanist is edited by Dr Alan Davies, a principal of Melbourne-based economic and planning consultancy, Pollard Davies Consulting.